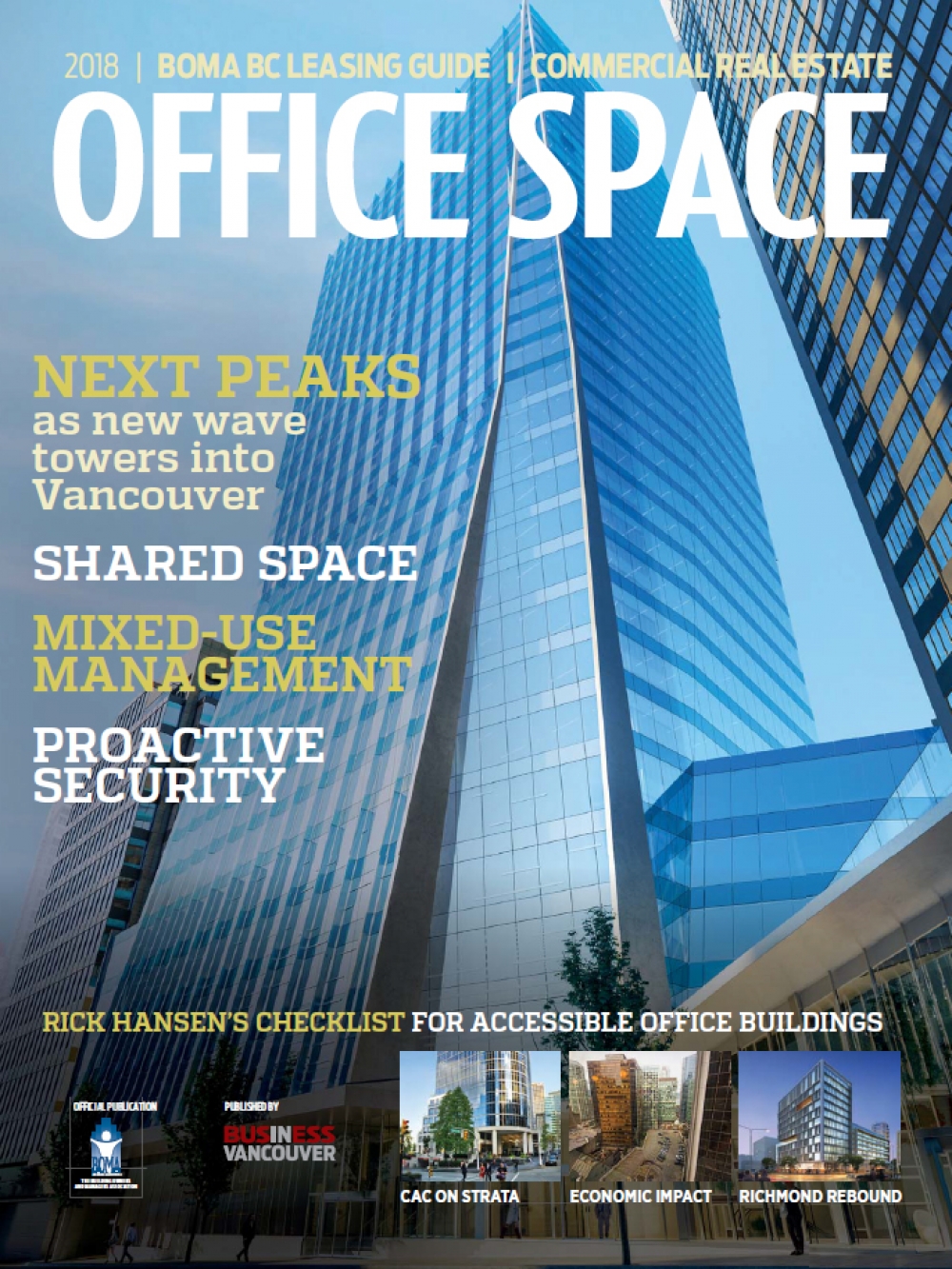 This was a 30-basis-point rise from 6.8 per cent at midyear 2017, due primarily to the addition of 252,000 square feet of vacant office space at the Exchange that came online in the fourth quarter. While approximately 85,000 square feet of the office space has been pre-leased in the Exchange, the tenants (National Bank, Hyperwallet Systems, Smythe LLP and Sovereign Insurance) will not occupy until mid- to late 2018 at the earliest, according to Avison Young.

Avison Young says this cycle will continue to 2021 with 650,000 square feet of space in three additional office towers.

Geoff Heu, vice-president of development, GWL Realty Advisors ... could not confirm any lease agreements with major companies. However, he notes GWL is in talks with tenants from a variety of industries including tech, finance and some co-working companies.

Vancouver Centre 2, a 33-storey office tower currently in development at 753 Seymour Street, will encompass 371,000 square feet and is slated to open in the summer of 2021. The building is the next phase of the Vancouver Centre complex, which includes Scotia Tower and Vancouver Centre Mall.

Two of the most notable leasing deals of last year included co-working companies. The first was Spaces at 939 Granville Street, which grabbed 67,000 square feet, and WeWork, which took six floors at Bentall 2. Heu says the co-working space boom is something they took into account when laying out the office space for Vancouver Centre 2.

"[Co-working companies] are some of the type of tenants that we are considering for our project," he says. "The design is set up to appeal to a broad market, and some of that includes the format for co-working spaces."

GIANT MOVES  The biggest lease deal to be finalized in 2017 was tech giant Amazon taking up 147,000 square feet of space at 402 Dunsmuir Street. Heu says this sent a message to the industry that big players and major international online and tech companies are seriously considering Vancouver when it comes to office space.

“The vacancy rate is the lowest in Canada and the second lowest in North America; it’s a 14-year low. It’s going to encourage developers to bring on their new projects,” he says. “And because of the tightness of the market and some of the demand from the tech companies, there is obviously a growing image of [downtown Vancouver] being a tech hub.”

Heu notes that until all the new square footage hits the market, upward pressure will continue on leasing rates. “Rents will have to come up,” he adds, stating “there continues to be a backlog when it comes to the permitting process” with the City of Vancouver, and that increases construction costs.

Robin Buntain, principal for office leasing sales and leasing tenant representation for Avison Young, says office space will remain highly competitive in downtown Vancouver given its geographical tightness and inability to fan out. Last year marked the third straight year of positive annual absorption recorded in the downtown core, according to Avison Young, after a 2015 peak of 1.1 million square feet. This was the highest annual absorption recorded in downtown since Avison Young started tracking the market in 1996, and
absorption has remained positive but dropped in each subsequent year.

“A tightening of vacancy and lack of product is definitely something we’ll see unless there’s a hiccup in the economy in the immediate future,” Buntain says. He adds the new wave of construction may provide “a little bit of relief.”

The City of Vancouver says it has approved approximately 8.2 million square feet of office space in the downtown core since council adopted the Metropolitan Core Jobs and Economy Land Use Plan in 2009.