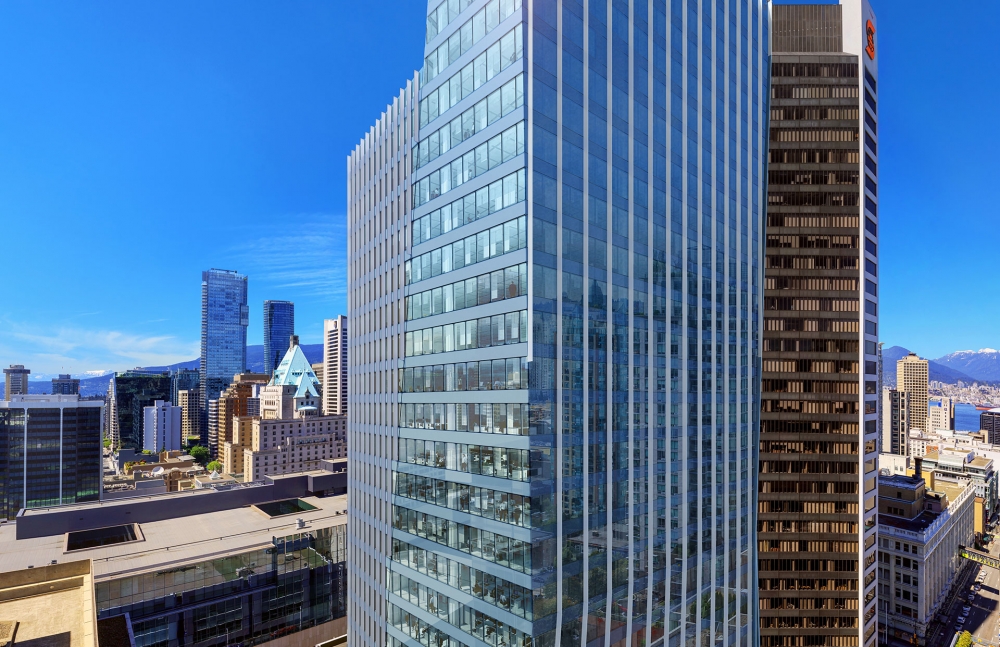 Vancouver Centre II is the first major project to commence construction in downtown Vancouver’s next cycle of commercial office development and is launching amid heightened demand for office space in the downtown core. With these compelling conditions at play, GWL Realty Advisors is proceeding with construction on a speculative basis. The building is slated to open in summer 2021.

“With its premier location and exceptional design, we expect that Vancouver Centre II will attract considerable market interest,” says Paul Finkbeiner, President, GWL Realty Advisors. “The building has been designed for forward-thinking, industry-leading firms that want to attract top talent, nurture innovation, and deliver results. We’re targeting WELL Certification and LEED Platinum standard which will make VCII one the healthiest and most sustainable buildings in the city.”

“Vancouver Centre II will play a major role in facilitating our city’s green economic growth by providing much needed office space as companies of all sizes and industries from all over the world look to set up shop in downtown Vancouver,” says Mayor Gregor Robertson. “As Vancouver’s innovation economy booms, Vancouver Centre II is sure to be a new hub for our booming local tech sector and a great addition to the downtown core, close to the city’s best amenities and transit.”

The launch of Vancouver Centre II represents the eastward shift of the city’s traditional business district. The area is quickly becoming the epicentre of Vancouver’s tech community, and is already home to several global tech giants. Growing interest in Vancouver as a tech hub is increasing the demand for office space. In its most recent market report (September 2017), Colliers International reports that downtown Vancouver vacancy rates are currently at 5.1 per cent compared with 6.9 per cent at the same point in 2016. Colliers also notes that technology, advertising, media, and information firms now account for 47.8 per cent of all current office space demand in the downtown core.

Vancouver Centre II Breaks Ground in the Centre of the City

Designed by Musson Cattell Mackey Partnership, Vancouver Centre II’s contemporary architecture is defined by sculptural form and clear glazing. An expansive, light-filled lobby atrium will connect Vancouver Centre II and Scotia Tower. Employees will have access to first-class amenities, including the 29th Floor Skyline Rooftop Deck and a private, state-of-the-art fitness facility and yoga studio with changerooms, showers, and end-of-trip cycling facilities. The building offers open and flexible floor plans that foster creativity and collaboration, and interiors can be tailored to meet each tenant’s specific needs.

Vancouver Centre II has been designed for businesses that understand the connection between the workspace environment and the ability to attract top talent. Health and wellness principles that aid in improving the fitness, mood, comfort, and performance of building occupants have been incorporated into the building design and long-term operations of Vancouver Centre II. The project is registered with the International WELL Building Institute™ in its WELL v1 for Core and Shell building rating system and is being designed in accordance with WELL requirements. Building structure, window locations, glazing selection, building proportions, interior finishes, ventilation, and lighting systems will all be considered for their impact on human health and wellness.

VCII’s digital infrastructure has been carefully considered to ensure that it addresses the advanced technology needs of today and has the capacity to upgrade to meet evolving requirements in the future.

For GWL Realty Advisors, Vancouver Centre II is part of $2 billion in office, industrial, mixed-use, and multi-residential projects that it has underway or planned across Canada. The company has $6 billion in completed, active, and pre-development projects. GWL Realty Advisors is recognized as a Green Star leader and has recently vaulted to the number one ranking in Canada and the top 8 per cent globally among real estate management firms by the Global Real Estate Sustainability Benchmark (GRESB).